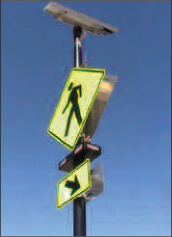 The new flash pattern is based on a flash cycle length of 800 milliseconds (ms) equaling 75 flash cycles per minute. It’s referenced as “WW+S” (Wig-Wag plus Simultaneous). The sequence is:

The interpretation was issued after the Texas Transportation Institute (TTI) tested several flash patterns for their effectiveness. Two patterns were found to be equally effective, but to keep some “uniformity” the “simpler” WW+S flash sequence was approved. Additionally, the WW+S was chosen “because it has a greater percentage of dark time when both beacons of the RRFB are off and because the beacons are on for less total time.”

The FHWA continued “The greater percentage of dark time is important because this will make it easier for drivers to read the sign and to see the waiting pedestrian, especially under nighttime conditions.”

For more information on the published TTI study go to: TTI Website. Clarification of interpretations can be found here at MUTCD link.