Most ITS devices are powered by the com-mercial power grid. KDOT in Wichita, Kansas used photovoltaic power for 17 temporary traffic detector installations throughout Sedgwick County. All were erected in the fall of 2008.

Telvent, who is overseeing the data collection for KDOT, will use the traffic data to establish a baseline before highway im-provements are implemented (alternative route; accident signs; 511 accident reporting, etc.) The impact can then be measured after traffic management upgrades.

KDOT used the existing infrastructure to minimize costs. Solar panels could not be mounted on existing poles due to wind loads. Mid American Signal came up with the ‘side-of-bridge’ solar panel mountings. 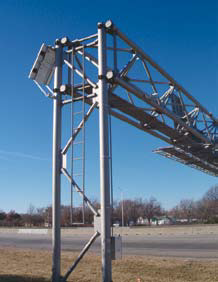 ELTEC sized the systems based on the load requirements guaranteeing sufficient power. The sophisticated sizing program accounts for power generated at that latitude as well as the number of sunny and cloudy days in the Wichita area. The system was not over sized or under sized. It has operated for a year without any incidences.

The data collection will last approxi-mately 18 months or until the new ITS project is completed, after which some of the self contained ITS solar powered systems will be integrated into the cen-trally controlled system and others will be moved and installed at new study areas using existing components.