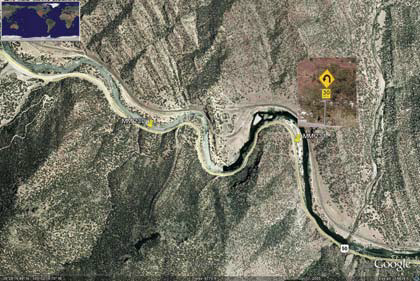 States with mountainous terrain frequently have ‘dead man curves’. US Hwy 50 in Colorado has two such curves paral-leling the Arkansas River. In the past, the canyon corridor between mile markers 230-231 averaged three truck rollovers annually. Spillage from the truck’s fuel combined with hazardous cargo took weeks or months to clean up. Cars consistently damaged the guardrail and replacement was frequent. In one area the drop-off is 80 feet. Colorado DOT installed stronger 3-rib, more deeply anchored guardrails, but the hazard still existed.

The issue is speed. CDOT corrected the issue with the instal-lation of a radar monitoring system. Any vehicle approach-ing a curve traveling over 35 MPH activates the blank-out sign to light up with “TIGHT CURVES” followed by flashing “SLOW DOWN”. The sign stays on for 30 seconds. The CDOT Region 5 Traffic Engineer says that since the system was installed in the spring of ’09, only one truck rollover has occurred. Guardrail damage has declined.

On both curves from either direction, the speeding vehicle detection system is installed on each side of the road. East bound the system is solar powered; traveling west it’s tied in to an electrical service. CDOT’s project engineer contacted Chris Mustoe with AM Signal, who provided consultation. AM Signal supplied all the system components.

ELTEC did the solar system sizing to ensure sufficient power for the radar detector and blank-out sign with 10 days of autonomy (fully functional for 10 days without solar charging output).