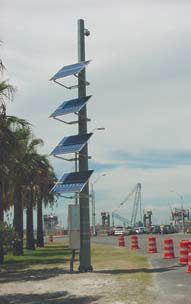 Border and port moni-toring is vital to Amer-ica’s security. In Sep-tember ’05 a Homeland Security Grant was is-sued to the TxDOT of-fice in Corpus Christi, Texas. The funding was used to increase port security by moni-toring all ferry and ve-hicular traffic traveling from the mainland to the City of Port Aran-sas/Mustang Island. Normally a 45 minute drive, the ferry ride is less than 10 minutes. Additionally, all cargo ships are observed to ensure that the “float-ing roadway” stays open/has no problems. This is critical with two naval bases close by.

Working with the lo-cal TxDOT represen-tative, Electrotechnics a.k.a ELTEC designed a 24/7 solar powered camera system. Out of 21 cameras 17 are solar powered (two are 24 VDC with the remain-ing cameras powered by 12VDC.) The pan-tilt-zoom cameras all have heaters to prevent condensation with cool weather as well as main-tain a minimum temperature when it becomes cold. 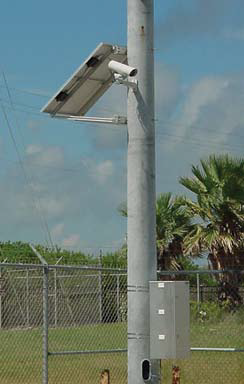 The cameras communicate several different ways to a central monitoring center: radio link to communicate across the channel via Ethernet, and fiber interface to a video switch.

Lightning strikes are a major problem in the area. The decision was made to use solar power for lightning immunity. No copper cable was used; thus eliminating any connection between the pole/device in the field and the switching equipment in the building. Also, the TxDOT office wanted to demonstrate that cameras could run without interruption on solar power. The system has not had a loss of load due to inadequate power confirming the system works with the camera load. This now allows remote regions without readily available AC power to utilize the proven system.

For more information, contact Susan Marshall at ELTEC: 800-227-1734 or Sales@elteccorp.com