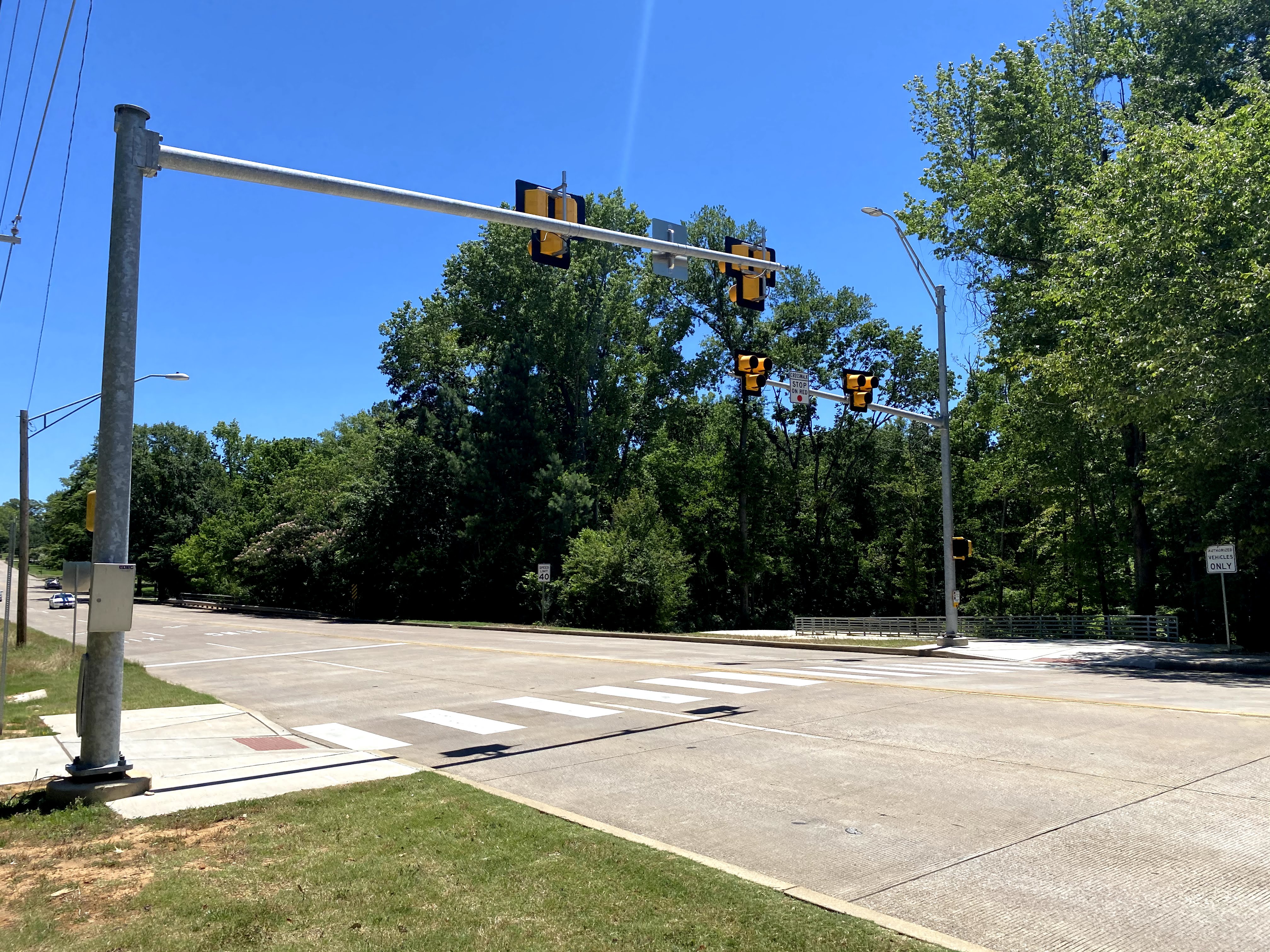 Although roadways are often thought of as car-specific, they are meant to be shared by vehicles, pedestrians, and cyclists. It doesn’t always feel that way to a pedestrian trying to cross a busy street, even with a painted intersection. Some drivers seem to think they own the road, while others appear oblivious to both the painted crosswalk and the pedestrian.

Pedestrians, too, can be distracted or overconfident that they have been seen and have the right-of-way. Driver/pedestrian encounters can be a recipe for disaster. The HAWK Pedestrian Crossing System is a solution to help complete the street, adding value to pedestrians and drivers alike.

What Is the HAWK Crossing System?

The HAWK Pedestrian Crossing System was designed in Tucson, Arizona during the late 1990s. The HAWK System, which stands for High-Intensity Activated Crosswalk Beacon, has the official name of the Pedestrian Hybrid Beacon (PHB) in the U.S. Department of Transportation Federal Highway Administration literature. It is also known as a Hybrid Pedestrian Crossing in the traffic industry.

The HAWK is a pedestrian-activated signal designed to enhance pedestrian safety while crossing the street in a location that does not have and does not warrant a traditional traffic signal.

A key to the HAWK Crossing System improving safety is its high visibility and unique appearance. In a HAWK system, a ladder-style crosswalk is painted on the street with a stop bar painted 50’ from the crosswalk.

Notably, T-shaped beacons with two horizontally placed red lights on top and a yellow light centered underneath are mounted beside the roadway on a masthead. The beacon remains dark until a pedestrian activates it.

The two red lights toggle back and forth (wig-wag) while the pedestrian crosses the street. Once the pedestrian has crossed, drivers may proceed with caution; however, each driver must stop at the painted stop line before crossing the intersection until the beacon goes dark again. The pedestrian “Don’t Walk” and “Walk” signals are always on.

The unusual visual cues heighten driver awareness of roadway conditions that require them to stop. As always, pedestrians must be aware of their surroundings. The addition of the dynamic and unusual signal ensures that drivers are better able to recognize pedestrian and cyclists’ needs.

Additionally, this helps prevent pedestrian injury by “second threat” drivers who illegally attempt to pass a car stopped for a pedestrian. Drivers are familiar with the flashing red light system requiring them to stop before proceeding, making them more likely to stop than at a painted-only crosswalk. 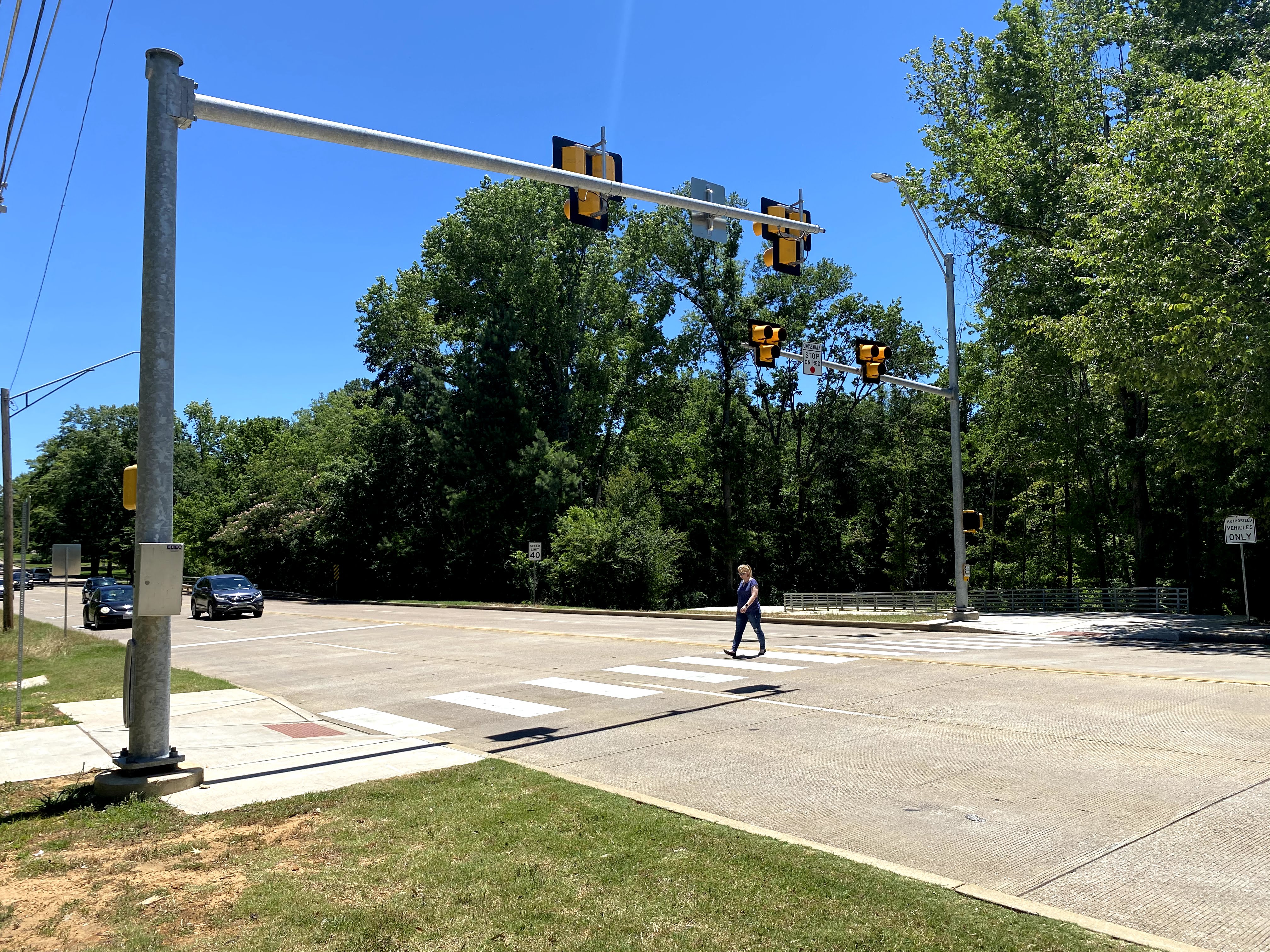 HAWK Crossing Systems reduce delays when compared to traditional traffic signals. Since they are pedestrian-activated, drivers are only required to stop when a pedestrian is present. This prevents the cycling of red and green lights that could hold up traffic and cause congestion in nearby neighborhoods and streets.

Drivers aren’t the only ones who experience a reduction in delays. Pedestrians’ travel times can be improved as well. Without the HAWK system, pedestrians may need to walk to another intersection further down the road to have a protected crosswalk. This detour lengthens their trips’ time and distance.

In both cases, reducing delays encourages compliance with the system. Drivers are less likely to pass through a red light when it is only an occasional inconvenience instead of a seemingly pointless stop. Providing a safe crossing for pedestrians helps prevent them from darting quickly into the road, creating a dangerous environment for themselves and others.

HAWK Crossing System timing is set for the area’s conditions. The duration of the flashing yellow is approximately 3 seconds. The yellow signal is set for a similar time as traditional traffic signal yellow lights in the area, keeping it familiar to drivers. The solid red light can be about 7-10 seconds long.

The wig-wag red signal varies depending on a couple of factors. First, road width is considered. Timing is calculated to be about 4ft/s as per the Manual on Uniform Traffic Control Devices (MUTCD). The nature of the pedestrian traffic further dictates how the timing is adjusted.

In areas in which there are greater populations of elderly or disabled pedestrians, the timing is increased. This is also true in areas where young children are likely to cross, such as near schools.

The built-in conflict monitor watches for issues such as communication failure and low battery. Solar power expands HAWK availability to include areas in which electrical power may be difficult and/or costly to access.

Most importantly, HAWK Crossing Systems augment pedestrian and cyclist safety. Midblock locations account for 70% of pedestrian fatalities each year. Studies have shown HAWK system driver compliance is as high as 97%, which is higher than for signaled lights and flashing yellow lights.

Studies have shown HAWK system driver compliance is as high as 97%, which is higher than for signaled lights and flashing yellow lights. Locations with HAWK systems have an up to 29% reduction in total crashes and an up to 69% reduction in pedestrian crashes. These statistics translate into safer roads and lives saved by HAWK Crossing Systems.

Policies on Complete Streets are becoming more common and more necessary all the time. Though cars may dominate the roadways, there has been something of a renaissance for walking and biking for exercise, fresh air, and transportation.

Complete Street designs focus on ease of use and safety for all roadway users equally. The HAWK Crossing System supports vehicles, pedestrians, and cyclists as they travel, helping each move through our streets in symbiotic harmony.